Our combat display showcases a range of traditional fighting techniques and weapons from spears through knives, bows and axes to swords. Displays feature bouts of single combat, highlighting a specific weapon or technique. We also demonstrate organised fighting techniques such as shield wall formations and massed attacks.

Training sessions are held every fortnight and allow our members to investigate traditional combat techniques with a variety of weapons. Practioners are encouraged to not only learn but analyse the the technical merits of various attack and defence manoeuvres, in both show combat and potential real fight scenarios. Not only do practitioners develop individual skills but also their ability to function as part of a team. 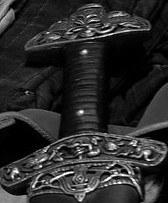